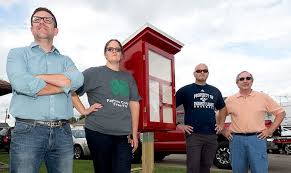 I had dinner with Pastor Aaron Chester and his wife Reagan tonight.  I was in Connersville Indiana to conduct his pastoral review.  Pastor and Mrs Chester told me about the blessing box ministry that was started by the Gortner Memorial church.  The boxes are installed throughout the community.  Individuals, congregations, schools, and clubs keep the boxes stocked with food, personal hygiene, and cleaning supplies.  The following article appeared in the News Examiner the local newspaper in Connersville, Indiana:

The blessings are adding up.

There are now four Blessings Box’s in Connersville, all placed by volunteers and members of Gortner Memorial Church of the Nazarene.

The boxes contain items such as deodorant, toilet tissue, food, laundry soap – anything needed by someone who hasn’t the extra money to buy them. The first Blessings Box was installed in the 120- block of East Fifth Street. The second is at Third Street and Eastern Avenue. The third was installed Wednesday on the front lawn of The Ha*ven. And later Wednesday, the fourth was placed in front of Sewtastik, 516 W. 22nd St.

All in a day’s work for Gortner volunteers, who have worked diligently to construct and install the boxes they hope will serve members of the community.

“Everything seems to be going pretty much as planned,” Jim Tash, Gortner member said of the Blessings Box project. “God’s been good to us and helping us out with this. Once we get these up, we’re looking for the community, anybody in the community that can offer a little bit, if they happen to have an extra can in their cupboard that happens to be a spare.”

The boxes were the idea of church member Larissa Larson, who saw an example of them in an online video.

After sharing the idea with several church members, the church decided to run with the project.

“These will have a lot of anything in it,” Tash said. “It’ll have soap, tissue, foodstuff, about anything somebody might need in their life that they may be short on. We have a lot of people in this community that have a need. A lot of them are in the background and are afraid to come out of the shadows and ask for help.

“With this out here, they don’t have to ask for it, they just show up and take what they need and maybe someday when God blesses them as their life improves, they may have an opportunity to come back and give back.”

Mayor Harold Gordon was on-hand for the third installation at The Ha*ven.

“I think it’s great,” Gordon said of the boxes. “They see a need and people are fulfilling that need. People expect the government to do everything for you all the time. It’s churches like Gortner Memorial that’s doing things like this, it’s like The Hav*en which is faith-based, and we need more things like that because there’s a lot of good things in this community and the churches are one of them.”

Gortner’s original goal was to place four boxes around the city, perhaps even as many as six, but the goal of four has now been reached.

Congratulations to Pastor Aaron Chester and the Gortner Memorial Church of the Nazarene for making a difference.  You show us that all of us can contribute to making our communities a better place to live.  Find a need and fill it.  I am proud of the way you are making a difference.