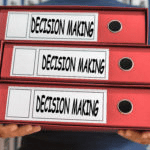 I heard Seth Godin speaking on a podcast. The intriguing thing that he said was whenever he asked a person what they do for a living they answer him with a position or a job title. For instance, when asked what do you do for a living you might respond I’m an attorney, a doctor, an engineer, a schoolteacher or I work in an office or I’m a pastor. Seth said all of that is incorrect whereas they may be titles or positions that you hold but that is not what you do for a living. What you do for a living or what you have been called to do in life is to make decisions!

A light bulb went off when I heard him make this statement. No doubt whatever your vocation, you are in the position you are in today to make decisions. Some of the things that cause us the most anxiety are directly related to the fact that we have a hard time making decisions. There could be several reasons offered as to why we struggle with decision-making. For some it’s the paralysis of analysis, they become so busy researching and studying the problem and in light of everything that’s happening they feel that they never have enough information to make a proper decision. One major reason that folks don’t make a decision is something simply called indecision. Many times we are called upon to make decisions in which there are differing opinions our fear is that in making a decision someone will not be happy.

Decision-making is not just an act of our vocation it’s something we need to do on a daily basis and it touches every area of our lives. Decisions must be made about our finances, health, goals, childcare and a host of other things as well. Many of us could indeed suffer from decision overload or fatigue.

I think there’s a larger reason that plays in our inability to make a decision. Decisions and the ensuing results can make us unpopular. As I sit here at my desk writing this article I can think of two or three decisions that I have made that have resulted in hurt feelings and people being angry with me. I am thinking of one particular situation where I had to come in and make a difficult decision that in the end cost me a few personal relationships. Some of the people who became the most upset before the decision was made had been very good friends. as a matter of fact the other day I was in a restaurant, I had arrived early as the hostess was escorting me back to my table I walked right by the table where two individuals who had been very close to me years ago were seated. Upon seeing me passing by their table they literally turned their body and heads as to not have to make eye contact with me. These were not just acquaintances these folks were friends. They not only now will not speak to me they won’t even look at me. Do I regret the decision? No, it had to be made. Do I feel a sense of loss regarding this and a few other relationships? Yes, but over time and with the help of the Lord I know that is a part of the territory of being a leader and having to make unpopular decisions. Not many weeks go by that someone doesn’t question a decision that I made. I am not intimating that I should be above criticism or second-guessing, What I am saying is that there is a price to making decisions. You would do well to think long and hard before taking a leadership position and come to an understanding that you will be called upon to make decisions that will not be popular.
Lest I frighten you off with the previous paragraph and trust me I could tell you a lot more about the pain that comes from making a decision. More pain I believe comes from not making decisions. Several churches are in difficult positions today and one of the contributing factors is the fact that leaders and boards failed to make proper decisions along the way. It seemed that their method was let’s kick the can down the alley a little farther and let someone else have to deal with the situation and problem. My problem is I have seemingly been born at the end of the alley where there is no more space in which to kick the can. Pick any job or profession you choose today and never forget that you are not just preparing for a career or a profession, you are preparing for a lifetime of making decisions.

How to make a decision:

Gather all the facts.
Look at the circumstance and situation from all angles.
Ask people who disagree with you what they think so that you make sure that you don’t miss anything.
Seek counsel from wise trusted advisors or mentors.
Pray.
understand what the consequence is of doing nothing.
Give yourself a deadline to make a decision. This will keep the decision from being open-ended and bringing this process to a conclusion.
If your decision proves to be incorrect, own it, apologize, and do your best to rectify the situation.

If you have a mentor I would spend some time with that person and have a thorough discussion about decisions and decision-making.

Decide today to be a decision-maker!  It is what you have been called to do!